At NerdWallet, we strive to help you make financial decisions with confidence. To do this, many or all of the products featured here are from our partners. However, this doesn’t influence our evaluations. Our opinions are our own.

Recently, my 10-year-old son and I took a trip to Morocco. In our family, we try to take regular one-on-one trips with each of our kids, and he decided on Morocco. After hearing about some of the experiences his older sister had on our trip to Taipei and Beijing, he definitely wanted to fly business class.

While I generally like to conserve my miles, there’s no doubt that having a flat bed for overnight flights can really help with jetlag. For one of our flights, we flew from Philadelphia to Doha in Qatar Airways business class. Here’s what you need to know about how I booked our tickets and what I thought of the flight.

How to book Qsuites

The astute among you might realize that Qatar is quite out of the way from the U.S. to Morocco. But in the end, it all depends on what you’re looking for in a trip. It did take an extra day to travel by routing this way, but we also spent more than nine hours in business class (twice), spent the night in Doha and also experienced the Qatar Airways Al Mourjan business class lounge in the Doha airport.

Using American Airlines AAdvantage miles is one of the best ways to book Qsuites. American’s award chart has it costing 70,000 AAdvantage miles per person to fly from the U.S. to the Middle East, or only 5,000 additional miles (75,000 total) to Africa.

Qatar Airways flies out of Terminal A at the Philadelphia airport, and we flew on an Airbus A350 in the Qsuite configuration. Our flight left at 9:15 p.m. Philadelphia time and was scheduled to arrive at 4:40 p.m. Doha time, for an approximate flight time of 11 hours 25 minutes. I was only able to snap this quick photo of the boarding lines before one of the gate agents told me I couldn’t take any pictures. I was not quite clear why this was the case, but I complied and did not take any additional photos of the gate area.

Our plane had 36 Qsuites in rows of four, with five rear-facing rows and four forward-facing rows. Each row had two window seats (either A and K or B and J) and two middle seats (either E and F or D and G). The business class lavatories are forward of row 1, and there is a galley there as well as one aft of row 6. The lavatories were not quite as luxurious as the Emirates A380 (with the onboard shower), but they were significantly nicer than a traditional airplane lavatory.

We boarded through the front door of the airplane (between rows 6 and 7) and made our way to our seats in 3E and 3F. If you are traveling with a companion, I recommend the rear-facing middle seats (E and F), as these have a divider that can be lowered so the space is more open and it’s easy to talk with your companion.

Because of the way each row alternates between rear-facing and forward-facing, every seat has aisle access, which is great on an overnight flight like this.

As we boarded, I noticed that each seat had a small pillow with an inspirational travel quote, along with a blanket and amenity kit. 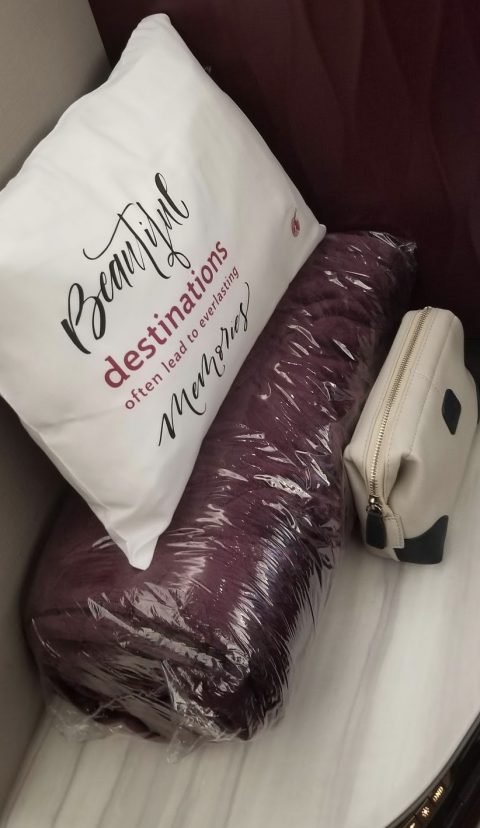 And of course with such a premium product, the Qsuite seat lies flat into a bed.

Each seat comes with a wide array of configurations, along with a remote control that allows you to control the seat or entertainment while reclined.

Each Qsuite is equipped with a large entertainment screen featuring Qatar’s “Oryx One” entertainment system. There were several movies and TV shows available to watch, along with a variety of music, in-flight cameras and other options. 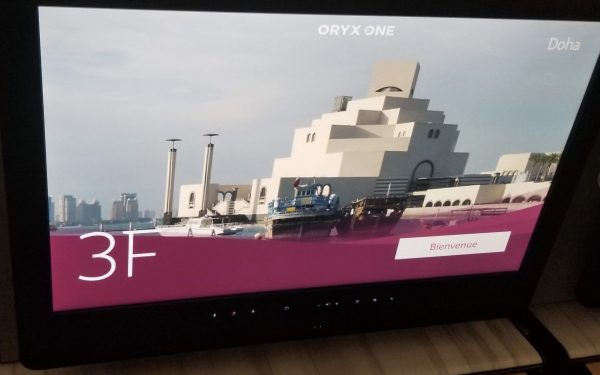 There was a compartment at the side of each seat with headphones. 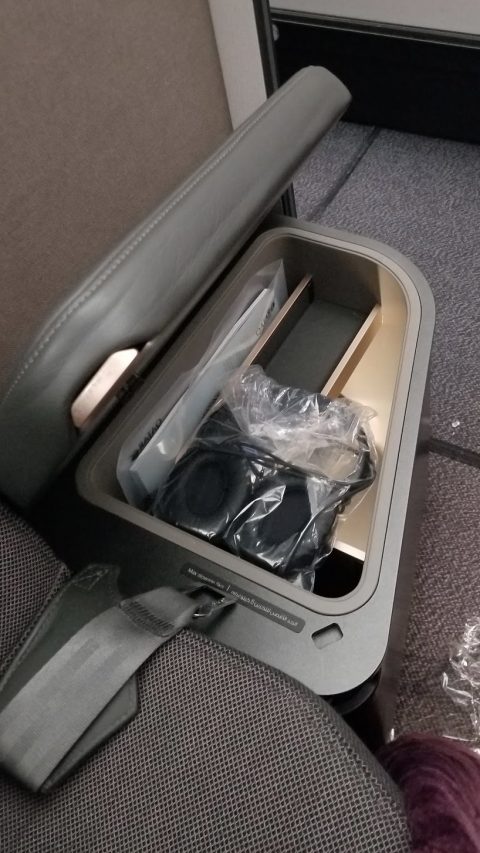 Unlike most other business class products, the Qsuite features a door you can close, for increased privacy.

Service began with warm nuts and hot towels. As this was my son’s first business class flight, he had no idea what to do with a hot towel. 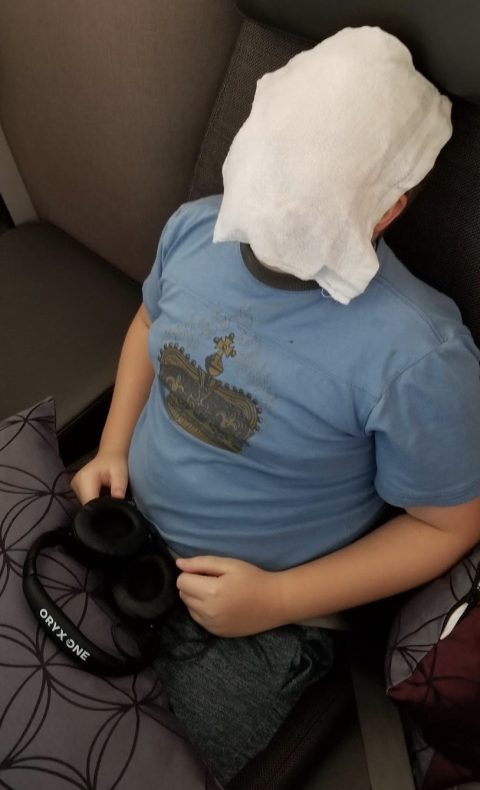 The food is served a la carte and available at any time. Because the flight takes off in the evening Philadelphia time, I ordered dinner as the rest of the flight was still boarding. 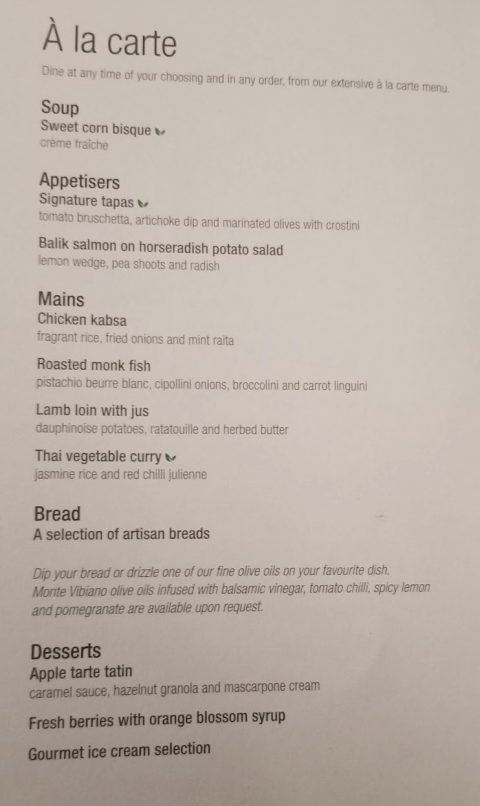 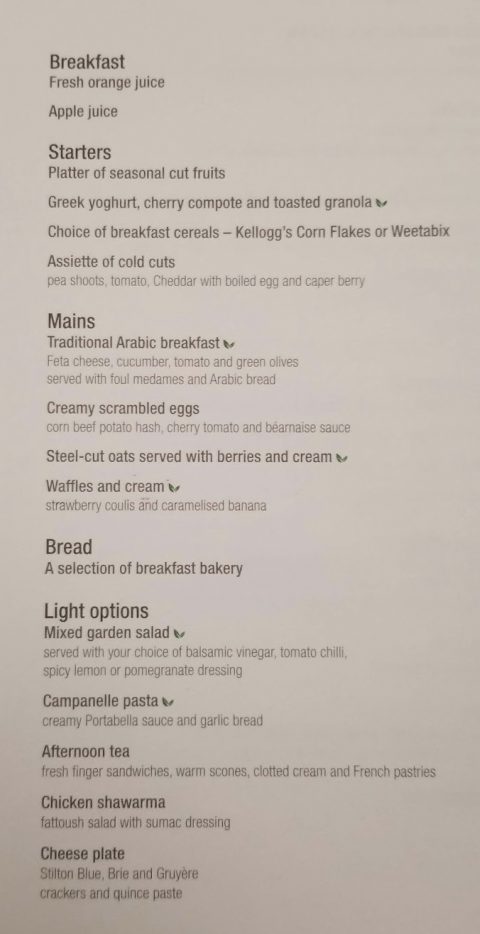 It was served shortly after we reached our cruising altitude.  First there was a starter course with bread.

One thing I appreciated about the flight was that a non-alcoholic grape juice was offered. I don’t drink alcohol, so on previous flights I’ve been forced to take my “fancy” meal with Diet Coke, which feels like a bit of a letdown. This flight came with a variety of other mocktails, cocktails and soft drinks. There was also a large selection of other alcoholic drinks, and their featured drinks were Sauvignon Blanc 2017, a Matanzas Creek Chardonnay and Taittinger or Pommery Champagne.

After that came the appetizer (signature tapas) …

… followed by the main course. 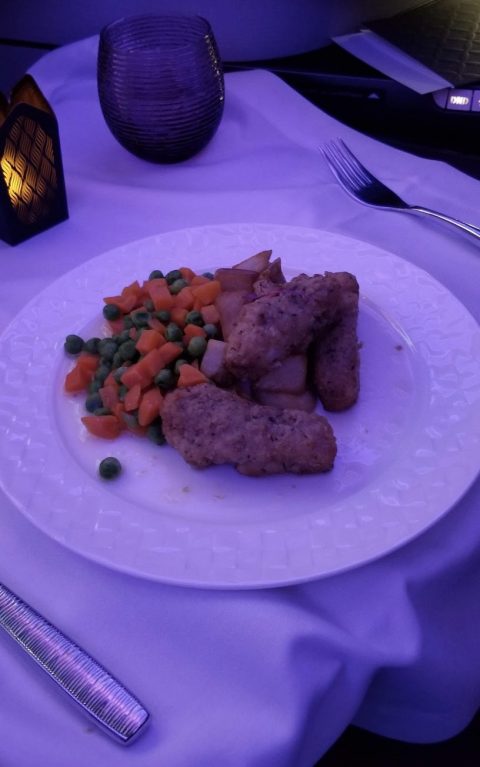 As we prepared to land, I had breakfast, which started with the cold cut assortment …

… followed by waffles and strawberries.

I also had the cheese and fruit platter, which was delicious.

When we landed in the mid-afternoon the next day in Doha, we quickly deplaned and made our way through Hamad International Airport. We followed the signs for arriving passengers, even though we were transiting to Morocco. Our connecting flight was not until the next morning, so we were planning on staying in Doha for the night.

As we made our way to immigration and customs, there was a sign indicating that business and first class passengers should go a different direction. I didn’t get a picture of it because I know most places are sensitive about pictures in the immigration area. I followed the signs and it led to a miniature airport lounge. There wasn’t any food, but there were seats and drinks available. Then you could clear immigration right out of the lounge, with no line. Another nice perk of flying Qatar into Doha.

How to maximize your rewards

Planning a trip? Check out these articles for more inspiration and advice:
Find the best travel credit card for you
Your Guide to the Oneworld Alliance
Earn more points and miles with these 6 strategies